I was introduced to the wide world of spinning a number of years ago by way of the drop spindle.  A friend of ours made several and used them to teach spinning. Which is really to say fish them in, or maybe that was just me.  But anyway, I spent a Saturday in a park learning to create clunky, thick thin crazy sorta yarn that wasn’t particularly pretty or even useful.  And I learned why the call it a drop spindle.  If ever you’ve used one you know what I mean.  And if you haven’t, well, try it sometime and you’ll figure it out in a hurry.   And of course a seed was planted.

Several years and several attempts to convince myself I didn’t have room for a spinning wheel (stop laughing) one last weekend of trying to spin with the less than perfect spindles I made myself I decided to take the leap to the wheel and thought I’d never look back.  I knew to appreciate the spindle for what it taught me before I went to a wheel.  The transition was easier for knowing how to draft and having a general idea of what the finished product would be.

So then last summer facing another long weekend far far away without my wheel to keep me busy at a reenactment, I caved to peer pressure and bought a spindle.  Get a GOOD one, she said. THIS kind she pushed. If you don’t love it I’ll buy it from you, she promised.  So I caved.  And I bought my first big girl spindle from Houndesign Darvish

And I decided spindles might not be so bad.  Because it turns out that the knowledge I gained on the wheel made transitioning to a spindle a snap! And while it will never be as efficient as spinning on a wheel sometimes it’s relaxing and, well, different, which is nice.  So then this happened

That one’s a Spindlewood square in purple heart.  Turns out I have a real weakness for purple heart…  And the square is a beautiful spinner, too, and a completely different feel to the first big girl spindle.  Which may have lead to a spindle for my In Case of Emergency Jar in my office. A Kundert this time.  Amazingly handy to have an emergency spindle and fiber stash at my desk. I can’t believe I didn’t think of it sooner

And I may have added an Ann Grout turnip which I don’t have a picture of but you can see here.  It’s my first supported (like how I say first.  I bet you can guess what that means) and it’s really sort of fun if not a bit tricksy with cats.

And then there’s the Turkish from Subterranean Woodworks that is so so pretty. And addictive.  The photos shamelessly stolen from my Etsy receipt because I never managed to take one but I do love this little guy 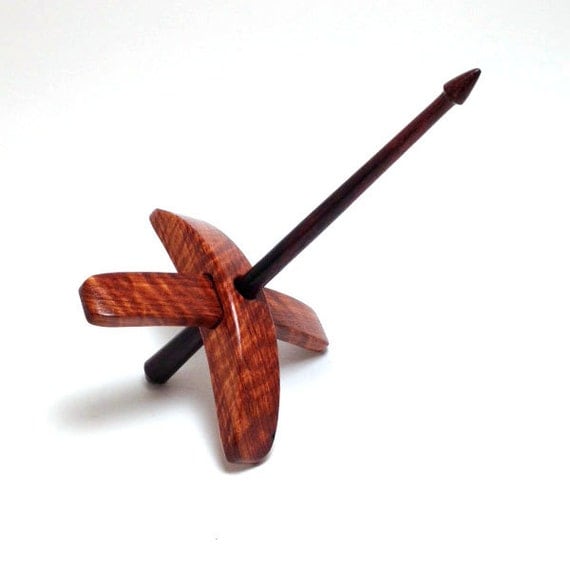 So much that I’ve ordered another Turkish from Jeri Brock Woodwoorks…  Custom.  With canons carved in the arms. I can’t wait to see what she does with that!  And while I wait I find myself scouring the Ravelry boards looking for destashes.  I want a Golding.  And maybe a…  I dunno, but I’m sure something will catch my eye.  Because much like spinning wheels, it turns out spindles breed like bunnies.  And I’m totally OK with that.